When the club showed him in the stadium last night I did wonder. Someone (Lucas maybe?) accidently dropped in to an interview a week or so ago that they thought he'd be back, didn't they, before someone else stepped in to hastily deny that one.

I think we've kept this one under out hats and then, even if he's on the bench, there's a good chance Ajax haven't prepared to potentially face him and they panic

Harrykane9 said:
Talksport have just said kane is on the bench tonight, surely if hes fit for the bench he has to start??
Click to expand...

He is probably just not fit enough to start and play the majority of the match.

I could see him on the bench, and warming up at about he hour mark to get Ajax nervous, but never come on except for penalties. Or come on for the last 30 minutes regardless

If he was to participate in any of the game you would have thought that he would be part of the group warming up for training. 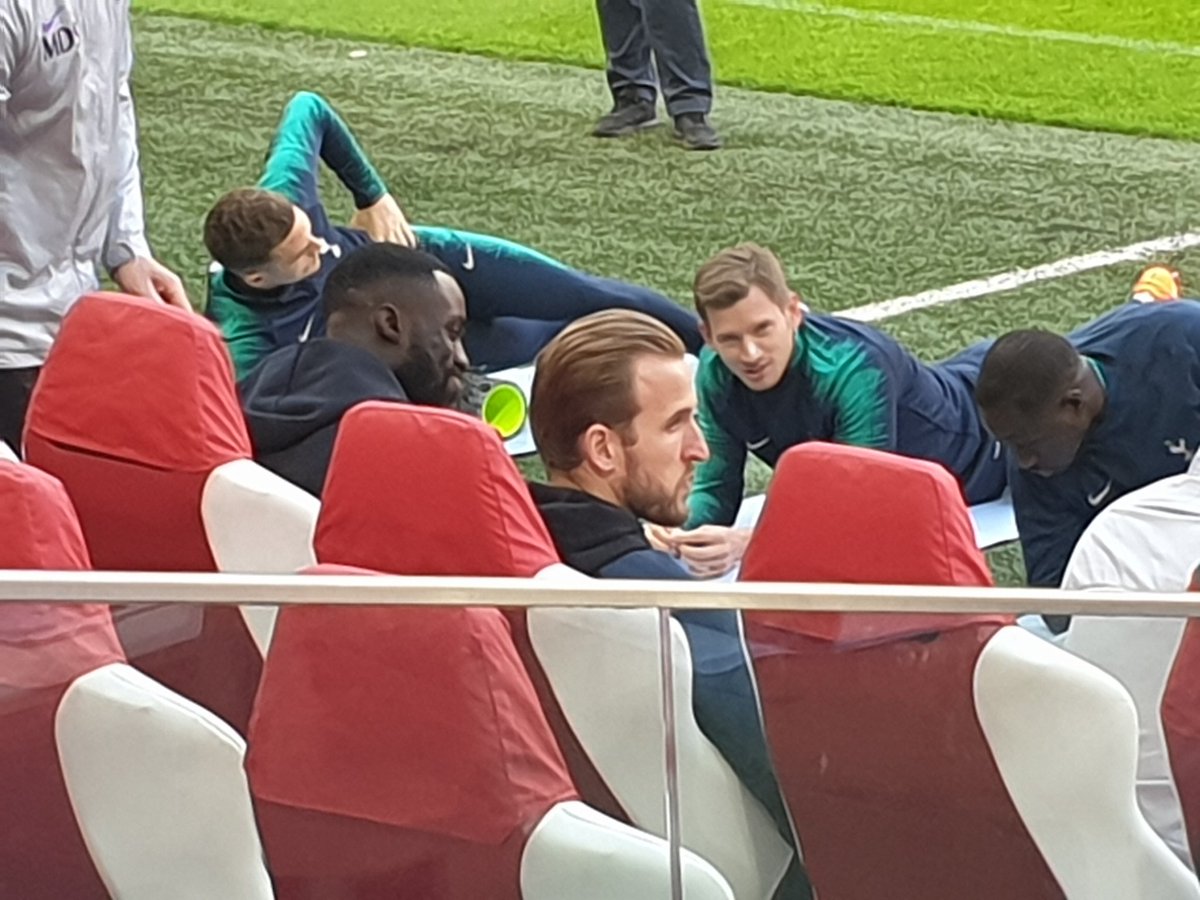 Guido said:
If he was to participate in any of the game you would have thought that he would be part of the group warming up for training.

Tin foil hat time, perhaps training away from main group so as to appear he won’t be on the bench?

Didn’t Poch rule both Kane and Davinson out? Is there precedent for saying a player is unavailable only for them to appear the following day?

Guido said:
If he was to participate in any of the game you would have thought that he would be part of the group warming up for training.

Having kept the secret this long, why would you ruin it for the sake of half an hour pointless training session in the opposition's stadium?

Colonel_K said:
Is there precedent for saying a player is unavailable only for them to appear the following day?
Click to expand...

Basically every Man U or Liverpool player whenever there's an England friendly international.......

I think he will be on the bench tonight.

Incomplete_usernam said:
I think he will be on the bench tonight.
Click to expand...

My one and only club

Incomplete_usernam said:
I think he will be on the bench tonight.
Click to expand...

Only if Poch needs a second assistant manager.

I very much doubt Poch would risk Harry, even in a match as big as this

Better he gets ready for the final

'you middle class out of touch cunt!'

Assume everyone heard that - JJ speaking Harry who said he’d be available if we got to the final....

ElTel said:
Trippier being interviewed on radio saying that Harry burst into the dressing at half time and absolutely went mental at all the players and gave a stirring speech to get everyone going

The story is, no one could understand what Harry was saying.

Blanchflower was 37 and approaching the end of his glorious decade at White Hart Lane. He was carrying an injury in Rotterdam but chose to play because Dave Mackay was unfit. It was an indication of Blanchflower's status that he decided whether he would play, not manager Bill Nicholson.

As Greaves has recalled, Blanchflower even interrupted Nicholson's teamtalk before the final. Nicholson had been praising the Atletico team, who were the holders of the Cup having beaten Fiorentina in 1962.
'Bill began systematically to go through the strengths of each player, only for Danny to jump in and stop him in full flow,' Greaves said.

'Danny poured cold water on the merits of the Spaniards and reminded us all of our, to his mind, superior qualities as individuals and as a team. Bill Nicholson took a back seat and Spurs' success in that final was in no small way down to Danny and the proactive stance he took in our dressing room before the game.'

For better or worse

Kane is always surprising us, almost everyone tought he wouldn't make in the beginning, than he scored some goals but still doesn't seem very talented, then he scored some more goal and we tought, maybe he is a good backup Striker? And he scored more, and was labelled as a one season wonder. And he proved he wasn't a one season wonder. But not also, he proved not just a goalscorer, he proved to be creative, a player that can play anywhere and even his aerial game that was woeful improved so much that he score headers for fun now. Now, after people claiming that can't even understand what he speaks, he gives a speech like this. Anytime you doubt Kane he will prove you wrong.
You must log in or register to reply here.
Share:
Facebook Twitter Reddit WhatsApp Email Link
Top Bottom